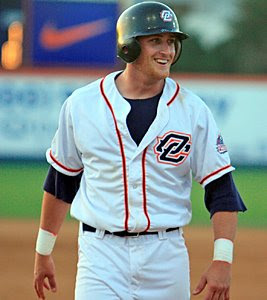 Independent Leagues Player Of The Year


Two years ago, Patrick Breen thought he was just one good season away from the big leagues. A year later, he was released.

Patrick Breen
"I am big believer that everything happens for a reason. The year I had offensively is a tribute to (Orange County hitting coach) Darrell Evans. He completely changed how I looked at hitting," Breen said. "He completely changed my swing. He simplified everything. If I had never been released by Tampa Bay, I never would have done that."

It sure worked this year. With his retooled approach, Breen broke the Golden Baseball League records for home runs (28), on-base percentage (.509), slugging percentage (.825), total bases (227) and extra-base hits (56). The center fielder also won the batting title thanks to his .396 average, and finished three RBIs short of a Triple Crown.

For his impressive season, plus his leadership role in driving Orange County to the Golden Baseball League title, Breen is the 2008 Independent Leagues Player of the Year.

It's a nice turnaround for the Rays' 2004 21st-round pick. Coming out of Houston, Breen struggled through his debut, hitting .222 as he recovered from a broken wrist. But once the wrist healed, Breen was a very productive player for the next two seasons. He hit .302/.383/.502 in the pitcher-friendly Midwest League the next season, and followed it up by hitting 21 home runs in only 94 games at high Class A Visalia in 2006. He got a late-season promotion to Double-A Montgomery and seemed to be establishing himself as a late-round find. As Breen saw it, he was one more good year away from getting a shot at the major leagues.

But all of that fell apart in 2007. He was beaned during a spring training game against the Yankees. In hindsight, it may have been a good idea to take a little time to recover and get over the effects of the concussion, but he worried that he would be washed up if he was kept back in extended spring, so Breen was back on the field and in the Montgomery lineup when the season started.

"I thought I was in the best shape I had ever been and I thought I was just a step away from the big leagues," Breen said. "Dealing with post-concussion syndrome, I realized how little being physically ready compares to being mentally ready."

By the time he was told during spring training this year that he was being released, Breen was expecting it. Not many guys see their release coming. But "not many guys hit .194 the year before," Breen explained.

Breen, 26, figured that his career might be over, but then he got a call from former teammate Josh Arhart, who was joining the Golden League's Orange County Flyers. The chance to play for a pair of big league stars in manager Gary Carter and hitting coach Darrell Evans helped induce Breen to give it another shot.

Within a couple of weeks, he was happy he did. Pretty quickly, Evans and Breen decided to retool his entire approach. Breen had gotten into the habit of diving at the plate to try to hit the ball to the opposite field. His somewhat mechanical swing was also making it hard for him to turn around good fastballs. Once he was overmatched by fastballs, he started cheating to try to catch up to them, which left him helpless against breaking balls and changeups.

In other words, he was a hopeless wreck at the plate.

So Evans and Breen got to work. They moved him closer to the plate, simplified his swing and got him to stand more upright. In doing so, they freed Breen up to tap into his raw power.

"He was pretty stiff and wrapped. The wrap meant he couldn't get around on a mid-90s fastball," Evans said. "We got him to straighten up to get his hands more forward."

The results were pretty impressive. Breen started putting on shows in batting practice, launching moon shots. And since he could get around on any fastball a Golden League pitcher could throw him, it became easier to hit breaking balls and changeups as well.

The results were a season-long power binge. Breen averaged a home run every 9.8 at-bats. He had 32 multi-hit games (in 80 games played), and hit better than .400 in three of the four months of the season. The Golden League had inflated offensive numbers this year, with no team finishing with an ERA below 5.00, but even in a league with huge offensive numbers, Breen's slugging percentage was more than 100 points better than the league's second best. His on-base percentage was 40 points better than anyone else.

"I've never seen anyone have a better year," Evans said. "Everything he hit was a bullet."

The Flyers rode Breen to a playoff appearance, but when the playoffs rolled around, it didn't look like Breen would be around to enjoy them. In the second game of the first round of the playoffs, he ran full speed into the concrete outfield wall at Long Beach's Blair Field and was knocked out. The resulting inside-the-park home run was the game-winner, but the celebration was muted as both teams rushed out to center field to check on the motionless Breen.

Breen broke three ribs, bruised his shoulder, suffered a gash under one of his pair of black eyes and busted his nose. It was a gallant end to a pretty amazing season for Breen, or so everyone thought.

But when backup center fielder Trayvon Jackson was injured in a play at the plate a couple of games later, Breen decided to talk his way back into the lineup. With Jackson out, the Flyers didn't have another center fielder on the roster. So Breen figured that even if his bad shoulder and ribs would affect him at the plate, he still could help the team by playing defense.

"I told those guys all year, there is nothing I care about but winning a championship," he said. "We didn't have any other outfielders. It was time to give it up for the greater good."

"We won that championship. That's three seasons in a row for me (Montgomery won back-to-back titles when Breen was there)," he said. "I feel it totally made it worth it."

Now Breen is hoping that he'll get to try his new swing in a return trip to affiliated ball. As of late September no team had called, but Evans figures someone will. As the hitting coach for the Yankees in 1990, Evans watched Kevin Maas hit 21 home runs in 79 games as a rookie. He thinks Breen has more power and more potential.

Pat spent the off season working with me on the visual approach to the game. He realized after hitting .192 he needed to see the ball better. His new visual approach to hitting made his adjustments even easier. Pat was definetly a changed hitter. and we hope the best for him. He was diligent in working with the SportsEyesite software and that is why we have asked Pat to be an advisor for SportsEyeSite.

If you are thinking about buying a Softball bat you would have to look at the general materials and brand of the bat to see if it is appealing. Check its weight and length in your batting stance. Measure it with your body. You also can read the reviews about getting the sweet pop with your softball bat.