AMATEUR ATHLETE UPDATE
This is a partial list of SlowTheGameDown Clients 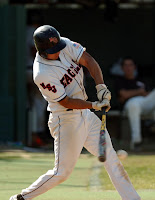 John Eshleman - Mt. San Jacinto College Eagles - All Foothill Conference first team . Eshleman had a team high batting average of .455 and set the Eagles single season hits record with 75. Eshleman also had 3 home runs and 32 RBI for the season to go along with 11 stolen bases.

to national ranking; Whether Yucaipa’s Matt Davidson is going to carry through with his commitment to play baseball at USC or be wooed into the professional ranks by a handsome signing bonus remains to be seen. No matter what the 6-foot-4, 225-pound right-hander decides, Davidson is a nugget. It’s just a matter of how long it takes him to polish his game. For sure, he is off to a great start. Davidson has driven the Thunderbirds to a 14-1 mark and a national ranking (No. 23 in this week's MaxPreps Xcellent 25). He is batting at a .524 clip (22 for 42) with three home runs and 19 RBI. As a pitcher, Davidson’s numbers are arguably more glittering. In eight appearances, he has posted three wins and four saves. He has not allowed an earned run and owns 24 strikeouts in 16 2/3 innings. Not surprisingly, the Trojans have Davidson ticketed as a two-way player – pitching and playing third base. Davidson, who has been clocked in the high 80s, has been selected to participate in the Aflac All-American High School Baseball Classic at Dodger Stadium in August."