The break of the curveball

The World's Best Illusion: The Secret of the Curve Ball

WASHINGTON, D.C. (ISNS) -- The three best visual illusions in the world were chosen at a gathering last weekend of neuroscientists and psychologists at the Naples Philharmonic Center for the Arts in Florida.

The winning entry, from a Bucknell University professor, may help explain why curve balls in baseball are so tricky to hit.

A properly thrown curve ball spins in a way that makes the air on one side move faster than on the other. This causes the ball to move along a gradual curve. From the point of view of a batter standing on home plate, though, curve balls seem to "break," or move suddenly in a new direction.

This year's winning illusion, created by Arthur Shapiro of Bucknell University in Pennsylvania, may explain this phenomena. His animation shows a spinning ball that, when watched directly, moves in a straight line. When seen out of the corner of the eye, however, the spin of the ball fools the brain into thinking that the ball is curving.

So as a baseball flies towards home plate, the moment when it passes from central to peripheral vision could exaggerate the movement of the ball, causing its gradual curve to be seen as a sudden jerk. 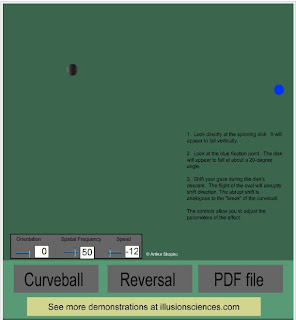 Look at the illusion http://illusioncontest.neuralcorrelate.com/cat/top-10-finalists/2009/#post-1074.